Gad, a troop shall tramp upon him, But he shall triumph at last

Note: It is recommended to at least read the House of Israel before reading this.

So far, I’ve written about the migrations of the Hebrews from the House of Israel, that they were unfaithful to YHWH and were banished into captivity via the Assyrians and eventually migrated to the Americas and the West Indies and elsewhere. I went into detail about the similarities in language and religious rites between the Hebrews and Native Americans well before the first European “missionaries” landed but how exactly do we know which tribe went where? In regards to that, let’s take a look at what is written about the tribe of Gad from ancient Jewish writings and what we know about Native Americans. Gad is the seventh son of Jacob and the full blood brother of Asher (Incas, I will get into this in another article). Moses writes in Numbers about some of the regulations for clothing garments for the tribes:

37 Then the Lord said to Moses, 38 “Give the following instructions to the people of Israel: Throughout the generations to come you must make tassels for the hems of your clothing and attach them with a blue cord.39 When you see the tassels, you will remember and obey all the commands of the Lord instead of following your own desires and defiling yourselves, as you are prone to do. This is why many of the Native tribes (throughout the Americas even) had clothing with this representation. Tassels are a known style of many Native tribes. In Leviticus, Moses wrote this about the Festival of Booths (a small shelter or tent): This may be the most defining symbol associated to Native Americans and their use of tents or tepees; this symbol also literally defined the tribe of Gad as it is their emblem (as seen on the title picture of this article).

And here in first Chronicles, a description of Gadites is given:

8 From the Gadites there went over to David at the stronghold in the wilderness mighty and experienced warriors, expert with shield and spear, whose faces were like the faces of lions, and who were swift as gazelles on the mountains.. Native Americans are also known to be fierce warriors and the association to lions can be understood from the picture here, especially when wearing war paint. James Adair spent 40 years living among them and also expressed nearly the same association in both facial features and athleticism:

The men are expert in the use of fire-arms, — in shooting the bow, — and throwing the feathered dart, and tomohawk, into the flying enemy. They resemble the lynx, with their sharp penetrating black eyes, and are exceedingly swift of foot; especially in a long chase..

Now there are so few Native Americans left at this point that people may not know them by their appearance and that they also were a dark skinned people. Giovanni reported back to the King of France regarding this: 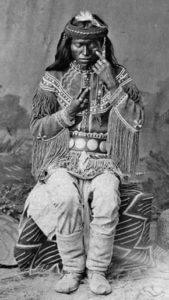 They are dark in color, not unlike the Ethiopians, with thick black hair, not very long, tied back behind the head like a small tail. As for the physique of these men, they are well proportioned, of medium height, a little taller than we are. They have broad chests, strong arms, and the legs and other parts of the body are well composed.

-Giovanni da Verrazano (recorded excerpt in a letter to Francis I, July 8th 1524) With these clues, there is consistency that all of the 12 tribes were of negroid descent including the tribe of Gad of the Northern Kingdom. It is important to remember that each of these tribes’ lineage is a direct line back to a son of Jacob that the tribe was named after, in this case Gad. The initial 12 sons and their father Jacob all were dark skinned Hebrews as we have gone over in previous articles. In the initial passage above that Moses wrote of Gad:

Gad, a troop shall tramp upon him, But he shall triumph at last We know that it was the early United States cavalry that committed such genocidal atrocities against the Natives. It is estimated that over 70 million Native Americans were murdered and killed from disease from the settlers to pave way for the North American empires we know today (United States and Canada). The second portion of this is to come when YHWH comes back with Yeshua to redeem His people. 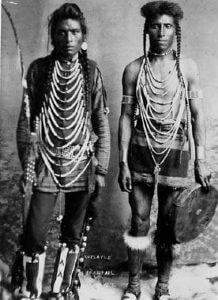 It is also worth noting that the tribe of Gad migrated into North America, likely the first (inland) land mass the House of Israel came into contact with after the migration from Assyrian captivity. The tribe of Gad has a history of getting to choose first so it makes sense as to why their tribe had settled in North America:

21 The people of Gad took the best land for themselves;

and in Joshua it states:

8 Half the tribe of Manasseh and the tribes of Reuben and Gad had already received their grants of land on the east side of the Jordan, for Moses, the servant of the Lord, had previously assigned this land to them.

Note: If you are already aware of some of the Hebrew artifacts found within the Americas, you may be wondering why I did not use them in my articles. There are various scientific artifacts that could be used as evidence that points to Native Americans being Hebrew Israelites such as the los lunas stone, the decalogue, the Newark holy stones, the sumerian (Cuneiform) clay tablets, the Brazilian Hebrew tablet…etc however I chose not to use these in the article above or likely elsewhere through this series because of the controversy and confusion surrounding a lot of these artifacts. I am not saying they are fake, all I am saying is that there is a lot of controversy so I chose not to bring them up.