For a while now, it has been on my mind and heart to research the ‘lost’ tribes, where did these ancient Hebrews go and when and where are they now? After having long conversations with close friends and family as well as listening to Kendrick Lamar who has spoken openly about where some of the Hebrews are today throughout his albums, I finally decided to start looking into what evidence there was out there for some very interesting theories I came across regarding the Hebrew diaspora (the displacement of the Israelites throughout the world). Before getting into those, here is a condensed version of historical background of the tribes and migrations:

Jacob (whose name was later changed to Israel) had 12 sons, each of his 12 sons were the founder of a tribe of Israel according to the name of that son. Here are the names of Jacob’s sons:

Of these, his most famous son Joseph (the favored one that their father Jacob had given a coat of many colors to) had two sons and those two sons became founders of their own tribes under Joseph (the tribes of Manasseh and Ephraim) making 13 tribes in all. Eventually they all ended up in Egypt via Joseph who had become a prominent figure for being able to interpret dreams. They flourished in Egypt for a time until they began to multiply and the Egyptians enslaved them to insure their dominance over the Hebrews, during slavery the Hebrews continued to increase and the 12 households became 13 tribes (because of the split of Joseph’s son’s tribes). 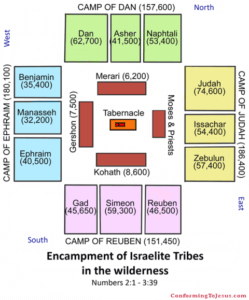 After God delivered them from Egypt and during their encampment through the desert led by Moses, their camp was divided up by tribes as well. The tribes were situated in groups of 3 on each of the 4 sides of their camps with the Levites in the middle of the camp as shown. The tribe of Levi being the priestly tribe that would later be dispersed throughout the land of Israel so there were the 12 tribes and also the Levites, the priestly tribe making 13 in all.

After King David’s reign, his son Solomon took over as King of Israel (the 12 tribes and the priestly Levites) and he pleased God. In his old age however, Solomon was eventually seduced away from God through his many foreign wives’ influence and began worshiping their gods aside from YHWH. 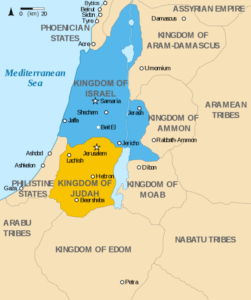 Because of this God tore the kingdom from him after he died and thus began the split Kingdom of Israel, the Northern Kingdom (the House of Israel, 10 of the tribes) and the Southern Kingdom (the House of Judah which consisted of Judah and Benjamin initially, remember that the Levites were dispersed throughout the two Kingdoms and thus did not have a sectioned off land of their own). Once Solomon died, Jeroboam (who had fled into Egypt to escape Solomon) came back to Israel and was crowned King of the Northern Kingdom but he soon brought disaster to Israel by worshiping Egyptian gods and even disrespected the priestly tribe of Levites and erected his own priests instead so the Levites relocated into the Southern Kingdom because of this. Many other Israelites from the tribes of Manasseh, Ephraim and Simeon also migrated to the Southern Kingdom during King Asa’s rule over the House of Judah because they saw that God was with him.

In 701 BC, Assyria invaded the Southern Kingdom but did not conquer it. By 605 BC, Jerusalem, the capital of the Southern Kingdom of Judah fell to the Babylonian King Nebuchadnezzar so Judah was also exiled because they were unfaithful to God. Some Israelites were taken captive to Babylon including the prophet Daniel, these captives eventually integrated with those taken from the Northern Kingdom. During the 6th and 5th centuries BC, Israelites were allowed to migrate back to Israel, Israelites from the tribes of Judah, Benjamin, Levi, Simeon as well as small remnants of others such as: Ephraim, Manasseh, Gad, Zebulun, Reuben and Naphtali returned to live in the Southern Kingdom of Judah. Here is a timeline that may help: So where did the Hebrews go from here? Did they all go back to Israel, did some decide to stay within the Assyrian/Babylonian empires? Did some decide to migrate elsewhere? The Hebrew diaspora has been discussed for centuries now. Because of the overwhelming amount of evidence I found during my research, I have broken down the answers to these questions into multiple articles, this being the second of the series going over a basic foundation of history and understanding of the tribes of Israel.